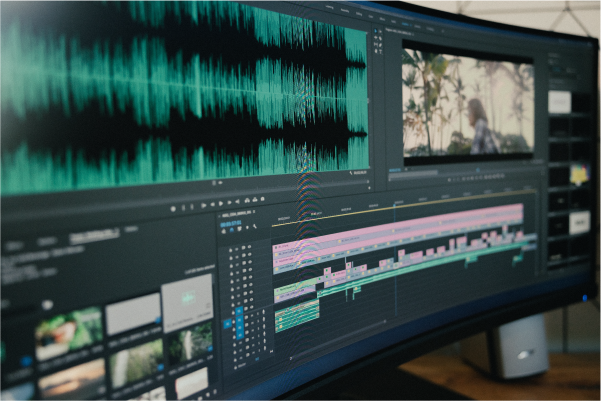 Raw footage alone isn’t enough to create a successful film. A well-produced video or movie relies on many processes that happen after filming. This is the art of post production—the process of editing together raw footage, incorporating visual effects, adding in sound, and color grading a film, so it comes together as one compelling, cohesive video. Below, you’ll find a complete guide on the post production process, including the tools you’ll need to get started.

Post-production is the editing portion of the filmmaking or video production process. During this process, the post-production crew not only pieces together raw footage, but adds sound (including music, voiceovers, and sound effects) and visual effects. This is when the film truly comes together into one cohesive story, rather than a variety of individual shots.

Without the film post production process, there is no finished product—you simply have raw footage that may or may not tell the story you want to tell. In fact, raw footage is often not shot in the order it is meant to be presented in, but rather, the order that was most efficient for the actors, location, and other factors. Presenting unedited footage likely wouldn’t make sense, let alone tell a compelling story.

Every element of post production works to enhance the overall story of the film. Background music, for example, sets the mood and tone of the piece—which is further enhanced by color grading. With skillful editing, a movie or video can reach its full potential.

Production and post production are both very important—but very different—elements of the filmmaking process. During production, filmmakers record the raw footage for the video or film. This part of the process involves bringing your crew, actors, and equipment to your chosen location(s) and capturing every angle and scene on your shot list.

The video post production process typically begins at the culmination of production, but sometimes the two stages overlap. This process involves reviewing the footage, piecing it together, and editing it together with audio and visual effects.

What Are the 5 Stages of Production?

Post-production processes may vary depending on your specific project, but they typically fall under the following general steps. If you’re just getting started in filmmaking, you can use these steps as a general post-production checklist.

The film post-production process typically begins with picture editing. This is when the raw footage is pieced together to tell the overall story. Essentially, the post-production editor reads the script, reviews the footage, and then cuts together the shots to create the story. This often leaves a lot of footage unused, or “on the cutting room floor,” but that’s a necessary part of the process—you can’t possibly use every piece of footage you shot.

This process isn’t completed in one single pass. Typically, the editor creates a first or rough cut. From there, additional edits will be made until you land on the final version of the film. Overall, this can take anywhere from a few weeks to a few months, depending on the length and complexity of the film.

Once the footage of the film is final, you’ll begin to add and enhance the sound. This doesn’t only involve adding background music, soundtrack, and sound effects, but editing out background noise and piecing together dialogue to match the flow of the story.

Sometimes, pieces of dialogue or sound effects that were recorded on set don’t come across well in the actual footage. In these cases, sound editors will re-record that sound or dialogue and reinsert it into the film.

When it comes to creating a soundtrack, you may decide to license existing songs or have an artist write original songs for your film.

Next, artists and engineers design computer-generated visual effects. This enables filmmakers to achieve effects that aren’t always feasible (or are too expensive to execute) in real life—like aging an actor or creating a massive explosion. During the production phase, scenes may also have been filmed in front of a green screen; during this stage, those backgrounds or other effects are added in place of the green screen.

Separate from adding sound effects and music, sound editors must also go into the film and adjust audio levels. This is done so, for example, dialogue can be heard over background music, or the sound effects of a car crash aren’t too loud and jarring in comparison to the other sounds in the film.

During this stage, a color editor goes through the movie frame by frame to adjust the color for both mood and consistency. The filmmaker may prefer a dark and dreary mood, for example, so the color editor would account for this when going through the footage.

Color grading creates consistency across shots, and can establish the mood of the scene or film.

Use Color to Strike the Right Mood

Color Grading: Introduction with a Pro Colorist with Fred Trevino

Adobe Premiere Pro is a type of non-linear editor (NLE), which means the different post production processes can be done in any order and with more flexibility. This program has capabilities for editing video, audio, and graphics, as well as tools for color correction.

Final Cut Pro is another type of NLE, and for those who are familiar with Mac operating systems and apps, this may be a more intuitive program. This program also supports multiple editing processes, from audio to visual.

DaVinci Resolve is a popular tool for its color grading capabilities. This tool typically renders faster than Adobe, and it’s also available for free.

While all the elements of film production are important, post production is a critical turning point in any movie or film. This editing process has the potential to bring any film to its full potential, so it truly resonates with the audience. With these tools and post production checklist, you can be well on your way to a powerful, cohesive film.